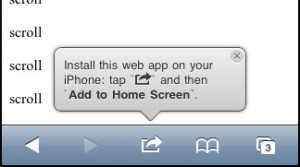 Apples iOS supports since ages a meta tag called “apple-mobile-web-app-capable”, with which a developer can tell iOS that web site doesn’t need navigation and url bars and is handling that itself. So, if this meta tag is set and a web site is called from the iOS homescreen it looks like a normal app for the normal visitor.

The problem is to tell its visitors that this behaviour is supported as most users don’t know that there is even the possibility to add websites to their homescreens.

But like they say – there is an app for that – there is a library for that: Matteo Spinelli has developed the wonderful tool AddToHomescreen. If you embed the code inside your web app, a small tooltip will be visible after page load which asks the user to add the site to their homescreen. The library checks itself that its only visible on compatible iOS devices and changes the little icon what the user should tap on automatically (its different on iPads and iPhones). Additionally you can configure some options like if and how long the tooltip stays or how long the tooltip remembers that the user has closed the tooltip and will not see it again.

After optimizing and deleting not-needed languages its payload is only 6 kB.

Attention if you are using requireJS

AddToHomeScreen uses the onload event to init itself by default, but that event is already gone when loading it via requireJS … at least when using it together with r.js optimizer (which you should!). But there is a (advanced) config option for this:

If this option is set, the library inits itself as soon as its loaded and doesn’t wait for the (already gone) load event.