I did it all wrong in my first angularJS application. Oh I did it really wrong!

The structure of my first angular project looked something like this:

So, all controllers were going to “controllers” folder, services into “services” folder and partials lived directly next to full html files. When we started to have more than 10 directives and 5 services the problems with this approach were really backfiring:

Since then I tried a few different approaches and while experimenting with ngStart as a skeleton for new angular projects I’m now settled with an approach I want to use in all my next projects.

What I came up with, is an approach that groups features into angularJS modules. The main advantages is that the code structure is based on features of the application and every feature is defining its own angularJS module. The angular root module then is the glue and binds all modules together.

The main idea is that every folder under “modules” is by definition an angular module. The module is always declared in a javascript file that is named like the folder (“about” -> about.js) and is the name of the module too. 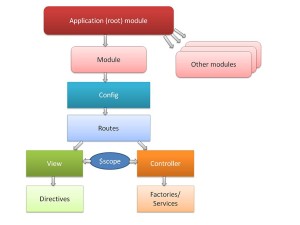 To refactor a certain feature you now know exactly where to begin and what files are directly dependent on each other when they implement a single feature. You can move modules around and even move them out of the your first single-page app, make another app and declare a dependency on the module to reuse your code.

In a small and trivial example the advantages of this approach are not easily visible, but as soon as a team of developers works together on an application it will grow very fast.

In enterprise applications there is usually a software architect who defines a structure which the team has to follow. Programming languages in the backend also have features to structure code in packages or modules and import it. Javascript doesn’t. And often times the software architect doesn’t care about javascript or the frontend at all. And frontend developers tend to not care about it neither as tools were missing in the past and there wasn’t really a need for it when writing jquery scripts.

But as frontend engineers or frontend developers of today, you should care! AngularJS is great. But angularJS applications will face the same problems as every other application that begins to grow. And your structure should make it easy to grow and adapt. You should care from the beginning!

16 thoughts on “How to structure large angularJS applications”