At my current company we are finally transitioning away from our well-aged Primefaces 3.0 jsf library and have implemented our own (composite) components for all use cases where we used primefaces thus far. As I learned a few things while implementing the components, I thought I could share it with others as good tutorials for composite components are quite rare. 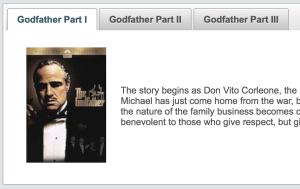 Our composite component which we will be developing here is a tabview component just like the one you see on this screenshot of primefaces showcase. The tabview needs to render 1-n different tabs which the user can switch through freely with a click to the tab header. It’s a standard widget found in every operating system and many widget frameworks.

We will develop it based on twitter bootstrap markup and you can use it without any additional client javascript, you don’t even need the bootstrap.js as the switching of tabs is entirely done on the server side (we are talkng about JSF here!). The main advantages of it over the primefaces tabview are that you have learned something about jsf and that you can freely change the html markup as you need it. You can use any CSS styling framework you like.

The component should work with every JSF 2.x version.

You can download the complete source code in my tabview github repository. You have to copy the templates and classes to your project manually. Don’t forget to adjust the package name of the class and the component name inside the class. If you have any question or suggestion just leave a comment.

END_OF_DOCUMENT_TOKEN_TO_BE_REPLACED

Writing JSF components is hard and complicated. No one in their right mind writes them. Except when you are a framework developer.

My team is struggling for some time now with Primefaces and its (natural) limitations where one cannot simply change the HTML output to the designers need. So, I spent some days this fall, to try to replace PrimeFaces components with an angular solution, so that PrimeFaces can be completely removed from the application and all components like dialogs or growls are replaced with angular directives.

I didn’t want to use AngularFaces as its trying to put too much magic into the application (for my personal taste). Its very interesting on paper, but when you use it, it seems that every single developer needs to understand exactly both lifecycles of JSF and angularJS and how both frameworks are working. This seems to be a challenge for every decent sized team.

Luckily, the XML parser of JSF leaves HTML tags it does not know of (aka: angularJS directives) alone and just outputs them in the rendered HTML. In a way, that works like the passthrough attributes in JSF 2.2.

As I wanted to use angularJS only as a “widget factory” in a JSF application, I had to solve only a short list of problems:

Besides the first, the last two problems were the challenge.

Inform angularJS about DOM changes after a JSF AJAX request

When you load angularJS on page load in a JSF page, its working as expected: its doing its thing and enhances the DOM according to the registered directives. If you don’t use any AJAX requests at all, you are basically done.

The challenge with AJAX requests is, that angularJS needs to be informed about those changes, as they happen outside of an angularJS digest but can contain new DOM nodes with angularJS directives or are destroying/changing existing directives. AngularFaces solved it in a brute-force-like-way: the angularJS app will be completely destroyed and recreated after every JSF AJAX request. But as I only wanted to use directives, that seemed a little harsh for me.

So, after a little experimenting I’m presenting you:

Its a (very small) library to update angularJS after every JSF AJAX request:

The result is that even DOM nodes which are updated via JSF AJAX requests are enhanced by angularJS directives.

The current state of JUA is not production ready. It was only tested on a few developer machines in a Mojarra JSF 2.1.7 environment (JBoss 7.1.1.). But as I don’t see any JSF dependencies, it should work with any JSF version, provided the JSF AJAX event listener callback interface was not changed.

When not using JSF 2.2 angularJS directives (aka HTML tags) can’t have JSF IDs and therefore can’t be the source of an JSF AJAX request. But even with JSF 2.2 or when you use a JSF component as a source, you have to build the requests yourself, which is … not so easy.

I made a short-cut here and am using the great OmniFaces library by balusC. With OmniFaces you have a o:commandScript JSF component which registers a global Javascript function to trigger a JSF request. The request can even send a payload with it (PrimeFaces has a similar component). When a angularJS directive needs to send AJAX requests to a managed bean, I’m just using a commandScript call, instead of inventing the wheel again. Works quite nice.

Use OmniFaces. Really, this library is great!

Re-implement your application in angularJS instead of JSF.

As pure JSF doesn’t have an easy way (is ANYTHING easy in JSF?) to execute Javascript after a JSF AJAX request, you can use OmniFaces Ajax.oncomplete() for this. Or (if you want) use the onComplete/onCompleteEvent function of JUA which guarentees that your callback listener is called AFTER angularJS was updated:

My dialog directive – which will be replacing the primefaces dialog component – registers a global javascript function for every dialog name, so that it just can be used like the primefaces dialog. Call dialog.show() anywhere (even in click handlers of JSF components) to show the dialog and dialog.hide() to close it. For developers who don’t know anything about the implementation details, the new dialog behaves just like the PrimeFaces dialog.

(this code is run inside an angularJS directive)

Make use of OmniFaces library components

Use o:messages of OmniFaces to output JSF messages to mimic the PrimeFaces growl component. With o:messages you can control the HTML output of messages and can give an angularJS directive all needed parameters to mimic a growl message.

Movie ‘Life’ was released in March 23, 2017 in genre Horror. Daniel Espinosa was directed this movie and starring by Rebecca Ferguson. This movie tell story about The six-member crew of the International Space Station is tasked with studying a sample from Mars that may be the first proof of extra-terrestrial life, which proves more intelligent than ever expected.

Do not miss to Watch movie Life (2017) Online for free with your family. only 2 step you can Watch or download this movie with high quality video. Come and join us! because very much movie can you watch free streaming.